The 13th of August 2018 marks the day when the embargo on AMD Threadripper 2 reviews, benchmarking and videos gets lifted. In this post is a more organised and precise look at the benchmarks and findings from various sources with more focus on the 32 core, 64 threaded 2990WX. 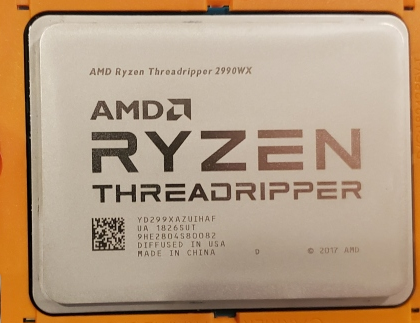 In the table below the purple shade marks the AMD Threadripper 2 offering comapred to the orange shade of the threadripper 1 (2017).

Gaming on this chip isnt really going to be getting nag for your buck. The higher core count comes at the cost of power powerdraw and slow clock speeds. Gaming excels with high clock speeds.

Honestly a little disheartened by the flagship models performance. The 2950X is half the price and beats the 2990WX in encoding and for gaming is either basically even of beating out again. At 16 cores the 2950X is the an upgraded 1950X (Threadripper gen 1). A look at the 2950X vs the 1950x may be on the cards. Unless doing some massive data or ai project the 32 core 2990WX remains as an impressive but worthless CPU for most.

It shouldnt need to be said but for gaming, streaming and even video editing the 2990WX wont be for you, lower the eys a bit.