Since the 2017-18 season NBA has been keeping player matchup stats for when a player is “matched up” against another. This basically makes your traditional boxscore stats like field goals attempted (FGA), field goals made (FGM), field goal percent (FGP), steals, points etc accountable to a player being opposed by another.

It has to be said that from all of the stats recorded the head to head match-ups would be one of the “not 100% correct” categories as there is just too many variables to was player x guarding player y at this time.

Simply stating who is the easiest to score on is more complex than looking at points conceded vs a certain player. One must look at volume of shots, possessions, time and then factor in points at a shooting percentage.

Obviously centers who take on players driving the lane will be accredited with being scored on, is this a good indication that this player gets scored on the most?

By having all the data inserted into a MySQL database I was able to utilize the AVG, COUNT, GROUP, SUM and ORDER BY functions.

The big men dominate this list, Rudy Gobert has the most points against his name. You can also see the average field goal percentage and the total amount of possessions. 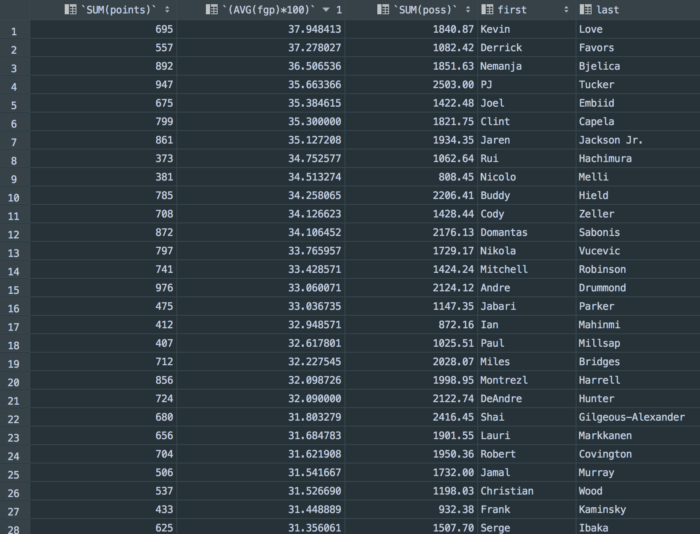 Seeing the average field goal percent against in my opinion is a much better indicator of difficulty to score against. Rudy Gobert is not on this list, Kevin Loves opponents on an average shoot at just under 38% from the field from 1840 possessions. Meanwhile Derrick Favours has just 1082 possessions to his name and his match ups shoot at 37%. 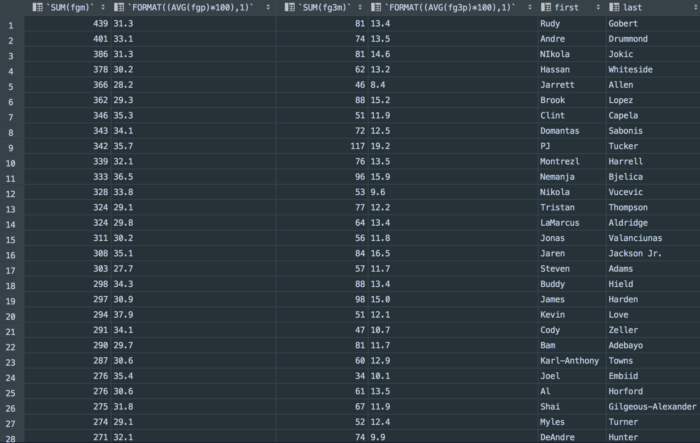 Rudy Gobert has conceded the most field goals, kind of obvious considering he has the most points scored against.

Most 3 point goals attempted against

PJ Tucker and James Harden lead the most 3 point field goal attempts against, these two are outliers against the rest of the list.

3 point field goals made against

PJ Tucker has given the most 3 point field goals up, his matchups on average shoot 19.2% from behind the arc.

Hassan Whiteside has almost half-blocked a shot in each of his matchups (0.43) this is daunting knowing that when matched up on Whiteside it is (almost) 50/50 on him blocking one of your shots. 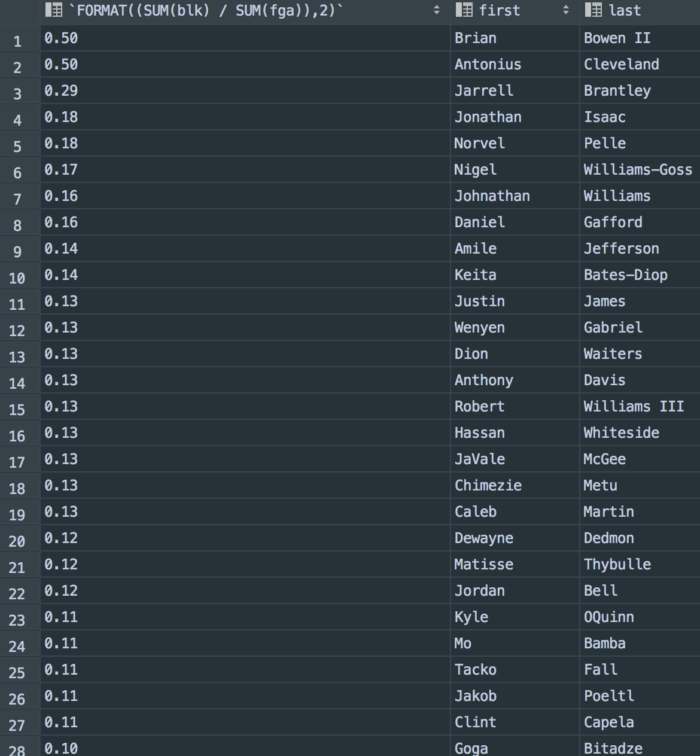 Here are the percentages of a field goal against being blocked, there are a couple of outliers that had low volume field goal attempts against, however i left these in.

The idea of these blocked shot stats is to show that whilst a player may get a great amount of points dropped on his head he may well still be blocking shots and causing a presence.

Now for some actual matchups:

Kyrie Irving against Andre Drummond in the 2:22 Kyrie has gone on a scoring spree with 32 points on 59% fgp. 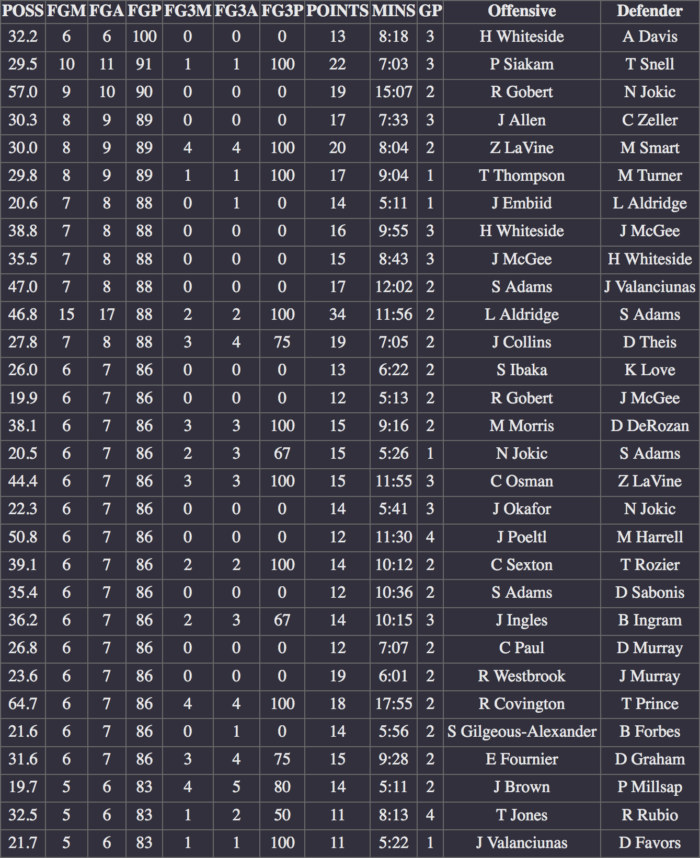 Sorting by field goal percentage with a minimum of 6 shot attempts there are many players in the high 80s, however they have only attempted 6-11 shots. LaMarcus Aldridge against Steven Adams has made 15 from 17 shots.

Field goals made can mean little compared to percentage of makes, there are no outliers for this metric.

Perhaps one way to determine if a player is getting scored on excessively is to look at points scored against per minute. This is calculated by doing (points / seconds x 60)

You can see the top of the duels list contains many mismatches where smaller and quicker guards successfully switched onto a big lumbering center.

This gives an insight into highly sort after pick and rolls that force a switch. 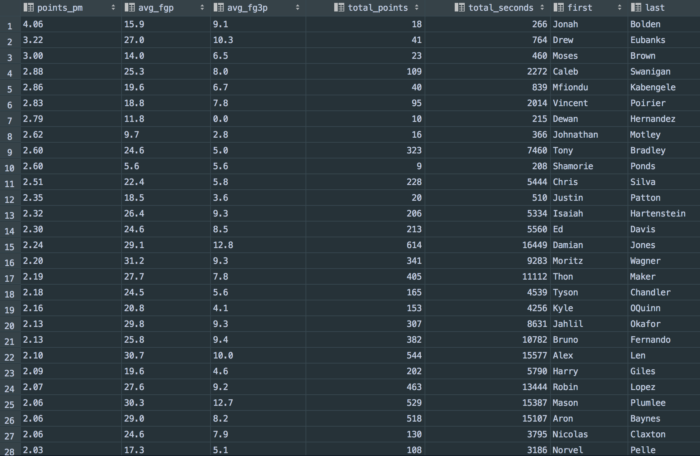 Now finding the average points per minute for each player brings up mostly bench players. Robin Lopez, Aaron Baynes and Mason Plumlee do sneak onto the list with an average of just over 2 points per minute from all their matchups.

Answering the question of who is getting scored on most leads to Rudy Gobert followed by Andre Drummond. Purely due to them playing under the rim, Gobert doesn’t have a high field goal percentage against but has conceded the most field goals.

Rudy Gobert had 0.27 blocks per matchup which was the top quartile. Given the pure volume of shots taken on Gobert, he is scored on the most but he is not the easiest to score on stat-wise and literally.